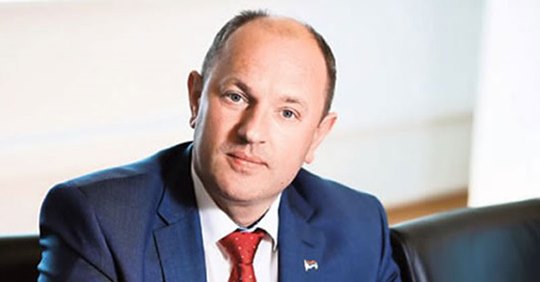 Elektroprivreda Republike Srpske(ERS) plans to build another 1000 MW of renewable energy capacity over the next ten years.Aiming to lead the energy transition in the region, ERS will invest in the construction of solar power plants,wind farms and hydro power plants, said Luka Petrović,general menager of the mixed holding ” Elektroprivreda Republike Srpske”, in an interview for the Balkan Green Energy News.

Petrović announces the Trebinje Energy Summit ( SET) to be held for the first time in march 2020, at the initiative of the ERS, at which the key topics will be the future of the Western Balkan and the potential of the energy sector of the Republika Srpska.

Republika Srpska will hold an energy summit in Trebinje for the first time in march 2020. What to expect from this gathering and what topics will be focus of the summit?

ERS initiative to hold the Energy Summit is a clear message to the regional enviroment and the EU that this company is ready to be the leader of positive changes in the process of aligning energy policy with the policy of EU.

Energy future of the Western Balkan and potentials of the energy sector of Republika Srpska will be the focus of a two-day event that is happening for the first time in our city.

Participants will be presented with a concrete idea to overcome difficulties that hinder the economic progress of the region and to provide long-term predictability to interested energy investors, and will be invited to jointly build concrete renewable energy potentials that have not yet been utilized. At the same time, through two days panels, which will be attented by emintent personalities in the field of energy, economy and science, will be kind of internationalisation of Trebinje and Republika Srpska.

It will be the opportunity to invinte all regional ministers and energy companies, to form a joint body to deal with the climate energy package “20-20-20″( reducing gas emissions with greenhouse effect by 20% compared to level from 1990.year, increasing the share of energy consumption from renewable sources to 20%, and incriease of energy efficiency to 20%).

The Summit will also be an opportunity to discuss an energy strategy of Bosnia and Hercegovina, which should set a clear direction for energy development by 2035, and launch market and regulatory reforms, while respecting the Republika Srpska strategic interests in the energy field, It is important to emphasize that the ERS can be a system intergrator in the process of creating a new strategy, in order to strengthen the overall economy of the Republika Srpska and make it energy efficient, because it has all the necessary resources for achieving such a goal.

Panel discussions are designed to be interesting for the professional as well for the general public, because during the event, the official part of the program, but also on the sidelines of the meeting, we will hear different opinions of the leaders of the energy sector, ministers, the most prominent professors and academics which will be published in the collections of works afther the manifestation. The results of well-grounded and reasoned discussions will be conclusions that will be adopted as a guide, as they will have a scientifically based basis and will be used as a clear guide to further strengthening the energy sector in the region.

ERS has recently established a company for the implementation of the Upper Drina project, which predicts the construction of three hydropower plants- Foča, Buk Bijela and Paunci. How far these projects were prepared and when construcion could begin?

What are the plans of ERS for the Gacko and Ugljevik thermal power plants, the energy stations that are at the end of the exploitation life?

What does the new ERS distribution organization anticipate? How that organization will affect the company’s operations?

The organizational model was modified in the sense that it abandoned the geographical one in favor of functional model based on the principles of profession management. Establishing a new organizational model involves optimazing the number of employees and the qualification structure. The competencies of each employee are crucial. It is a very complex process that is of importance to the ERS as a whole as it increases the efficiency and productivity of distribution companies.

To what extent does ERS plan to diversify its energy mix by investing in renewable energy sources? What projects will be in focus over the next five years? How far did the construction of the Hrgud wind farm come?

ERS has drawn up a development plan adopted by the government of Republika Srpska, where it is planed to build a plant that will produce electricity from various renewable energy sources. Each of these sources has its own characteristics, so the production facilities planned by the ERS need to be harmonized and that the optimum operation of all facilities is ensured.

We are currently carrying out activities on designing, securing the necessary permits and approvals for the planned 100 MW Trebinje 1 solar power plant. Activities are also underway to provide the necessary financial resources for the implementation of this project. By implementing the procedures, it was shown that it is possible to expand this project and build a solar power plant with higher power.

With regard to the use of wind energy, activities are underway to design, secure the necessary permits for the Hrgud wind farm, where the funding is 64 million euros, provided by KFW Bank.

Solar and wind farms as unmanageable energy sources, can be integrated into the electricity system, they need to be provided with balancing support. That is why the ERS builds hydropower plants, HPP Dabar, HPP Bileća and HPP Drina.

The ERS, as a responsible company, plants to build hydropower projects in areas at risk of flooding, with the primary goal of new kilowatts, but also to reduce the risk of flooding. We intensified the activities related to the construction of hydroelectric power plants in the area of lower course of the river Bosna, where the greatest damage was caused by floods.

Countries in the region, including BiH, should agree with the Energy Community on new renewable energy targets by 2030, followed by the adoption of national energy and climate plans(NEKP). Where do you see ERS in that period, and how can this company contribute to meeting those goals and plans?

Adopting national energy- climate plans will lead to a significiant increase in the commitments of countries in terms of the share of renewable energy sources in total electricity consumption. The intentions of the ERS are in line with the obligations of the Republika Srpska and BiH, given that our Action plan adopted by government of the Republika Srpska envisages intensive investment by the ERS in the construction of renewable energy facilities by 2030. The plan envisages a 10 year period for construction of 1000 MW facilities exclusively from renewable sources. The ERS will thus contribute to the achievement of the objectives set out in international treaties.

Also, the commitment of the ERS is to actively participate in the implementation of the action plan, not only in the field of renewable sources, but also in the field of energy efficiency and gas emissions. The ERS will pay special attention to the obligations related to the permitted emissions of CO2 and other harmful gases in power plants using fossil fuels, as they may ccause limitation of the existing thermal power plants operating within the ERS.